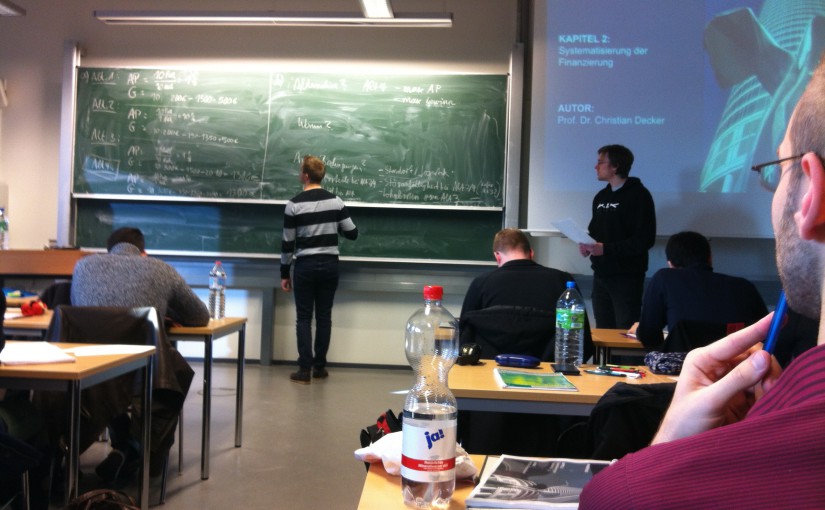 The mandatory course Finanzierung [Finance] is offered in three different degree programmes at HAW Hamburg. The total number of participants ranges between 150 and 200 per semester.

Over a period of several semesters including winter term 2013/14, continuously higher failure rates of up to 57% were observed. It was assumed that this development was caused by an extreme heterogeneity within the cohorts. Due to wide differences in cognitive capability, power of concentration and reflexion, articulateness, motivation and social behaviour, there was a great diversity in student performance.

In order to improve learning success, a new methodical-didactical concept based on the inverted classroom model (flipped classroom) was developed. The focus was put on centring and activating the students. For this purpose, the students’ self-navigation through the learning process was significantly increased and the learning environment received a constructivist design that supports active, collaborative and problem-based learning. The concept was realised within a completely new course that started in summer term 2013. E-learning units communicate the learning content, while the presence phase is used for exercising und discussing the content and deepening the understanding of the knowledge. As a consequence, the instructor acts as a “navigator”, accompanying students through the learning process.

The learning material for the online-phase on the internet-based learning-platform Moodle was produced with Adobe Captivate® (authoring tool) as well as Adobe Audition® (audio production) and Adobe Premiere Pro® (video production). The course encompasses a manuscript with a total of 376 animated script pages with voiceover spreading over different e-learning units with a total running time of 752 minutes. The e-learning units were enriched with additional videos and formative assessments (quizzes). In addition to the e-learning videos for the online phase, comprehensive teaching material such as exercise questions, case studies and reflective questions was developed. An extensive study guide including the written explanation of the course concepts ensures the interlocking of the online phase and the presence phase. Students can access a Q&A forum via the learning management system Moodle. Furthermore, news and topics relevant to the course content are provided by way of a Twitter feed.

The methodical-didactical concept and the technical production were realised on a private basis, i.e. without public funding and outside of regular working hours.

The course concept was scientifically accompanied by a master thesis project, which was supervised by Prof. Dr. Michael Kerres, Chair of Media Didactic and Knowledge Management at the University of Duisburg-Essen. Based on the empirical analysis, it could be proved that the implementation of the ICM at the HAW Hamburg resulted in a significantly higher learning success than the implementation of a traditional course format in the summer semester of 2013. The failure rate was only 13%. This result is accompanied by the enhancement of learner-centred self-guidance, active participation and collaboration within the learning processes.